Upon completing his training with Professor Sava Perovic from May to September 2003, Dr Kim Jin Hong MD PhD returned to Seoul to bring the human trials of penile girth enhancement of Dr Jae Sang Byun MD to Europe in 2004.

A total of 84 men ranging in age from 20 to 50 years (average age 28 years) were randomly selected to participate in the study from the 204 patients who obtained penile girth enhancement by tissue engineering from July 1999 to early 2004 from Dr Byun's Yeonsei-Plus Urologic Clinic in Seoul, the University Hospital in Belgrade and finally the Presidential Hospital of Russia in Moscow.

Among those selected, 70.24% suffered penile dysmorphic disorder (preoccupation with an imagined problem in penile appearance) while 25 patients (29.76%) had a history of previously failed penile girth enlargement.

Physical measurements of penile length and mid-shaft penile circumference in both the flaccid and erect states were obtained and recorded pre and post-operatively.

Pre-operative and post-operative intracavernous injection of Prostaglandine E1 and Doppler ultrasound were used for assessment of erectile function.

After local infiltration of 1% of lidocaine solution, a thumbnail sized, elliptical shaped skin incision was made and 0.5–1.0 cm3 of dermal tissue was harvested.

Biopsied dermal tissue was washed to remove red blood cells in serum-free Dulbecco’s modified eagle’s medium and minced into less then 1 mm pieces which were then distributed over three 100 x 15 mm Petri dishes.

The sliced tissues were treated with collagenase type IV, (2 mg/ml) and incubated at 37.8°C with 5% carbon dioxide for 24 hours.

Fibroblasts were suspended in culture media containing 5% of the patient’s serum and expanded in culture until the total cell number of at least 2 x 107 was reached.

The time required was between three and five weeks depending upon individual patients (mean 27 days).

This method has been surpassed by a superior technique in which a small amount of the patient's own blood is taken the day before surgery.

Serum is produced from that and used to prepare the scaffolds. (No longer is dermal tissue biopsied unless specifically requested by the patient.) 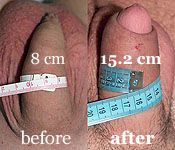 Starting in 2008, Sava Perovic began using 4 mm thick scaffolds “because all patients want more girth enhancement, but we also still have the thinner ones (3 mm).”

Some patients prefer to restrain their girth increase and choose the thinner PLGA scaffolds.

The scaffolds are a standard thickness so the percentage of net girth increase varies depending on the original circumference of the penis.

Pretreated scaffolds were then seeded with approximately 20 million fibroblasts and incubated for 24 hours at 37°C.

After subcoronal incision and penile degloving, two cell-seeded scaffolds were shape adjusted and transplanted between dartos and Buck’s fascia.

When the skin was non-compliant, scaffolds were placed under the lifted neurovascular bundle.

A ventral longitudinal incision with penile inversion and degloving was used in patients who requested prepuce (foreskin) preservation.

A compressive dressing was left in place for 7–10 days.

Antibiotics were administrated for the next five days.

Two weeks after surgery, patients started to use a vacuum device twice a day (5–10 minutes) during the first six months to prevent temporary penile retraction.

The clinical data concerning the final outcome and complications were obtained and recorded on control visits at two weeks as well as at 1, 3, 6 & 12 months after surgery and then annually. 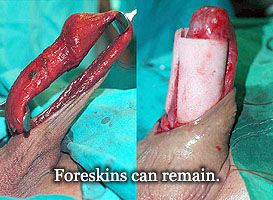 A study instrument comprised of a short, structured questionnaire, was modified and adopted from a validated study for a long-term outcome evaluation in hypospadias surgery.

Surgery was also judged on a scale from 1 to 5 with 5 being the best.

A genital appraisal was assessed in the second part of the questionnaire.