The Sava Perovic Foundation does not advise anyone regarding the pros and cons of sexual reassignment surgery nor advise who should get SRS surgery.

That is decided by the patient and their mental health professional, usually a psychiatrist with substantial experience and specialization in gender identity disorder (GID).

However, when a female to male transsexual has made the decision to get female genital modification, international medical tourism means everyone can now get the very best female to male operation from the best metoidioplasty surgeons at the Sava Perovic Foundation in Belgrade.

Perovic Metoidioplasty has been the premier surgical method for a female to male transsexual for most of the past couple of decades.

Dr Perovic continually developed and improved the procedure during each of the hundreds of FtM metoidioplasty surgeries he performed during his 40-year career. Dr Djinovic, Chairman of Sava Perovic Foundation, continues that tradition of continual improvement.

The British Journal of Urology (BJU) International's article about Perovic Metoidioplasty published in 2003 is widely re-published on numerous web sites.

But that was a study of only 22 patients and does not completely reflect the current extremely advanced state of F2M gender transformation transsexual surgery by Sava Perovic Foundation, especially Perovic Total Phalloplasty. 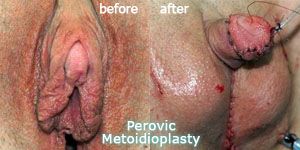 In the hundreds of metoidioplasty surgeries Dr Perovic and Dr Djinovic have done since then, the surgical team has constantly strived to improve the appearance of the new genitalia and significantly reduce complications.

There are a number of improvements and we have developed, some small ‘tricks’ regarding urethroplasty, so we have significantly fewer complications such as fistula and stenoses, said Professor Perovic.

We have also improved the aesthetics greatly, said Dr Djinovic.

And they get the longest penis possible unless they get Perovic Total Phalloplasty.

We cut the urethral plate in order to lengthen the neophallus and use buccal mucosa graft for the urethral lengthening, said Dr Perovic.

Our vaginectomy is almost without any bleeding and our patients almost never need a transfusion, said Dr Djinovic.

Also, fistula and stenoses are extremely rare in our hands, compared to others. And we always implant testicular implants concomitantly.” (Note: The urethral plate is a solid cord of endodermal cells coming from the bottom of the urogenital sinus a.k.a. the persistent cloaca.)

So the best female to male gender reassignment surgery is better than ever — and an excellent foundation for Perovic Total Phalloplasty at a later date.

The Foundation has an approximately 92% success rate — meaning surgery without complications.

That is a unique definition.

In the minds of the surgeons, any post-operative complication causes the surgery to be categorized a “failure” although most other people would consider it a success — but with subsequent problems that required additional work. Anything less than a perfect, problem-free surgical result = “unsuccessful”.

As the popular BJU article explains, FtM metoidioplasty can be considered a phalloplasty procedure because it creates a neophallus from an enlarged clitoris in female transsexuals.

It costs less, takes less time and has fewer stages than Total Phalloplasty and also enables the patient to urinate standing up.

However, Metoidioplasty is not a prerequisite for Total Phalloplasty.

One of the reasons metoidioplasty is so effective, efficient and successful is because of the Sava Perovic Foundation surgical team's extensive experience and knowledge regarding all other types of complex and challenging urogenital reconstructive surgery for children and adults, men and women.

The core of the Foundation's success is the combination of the Professor's remarkable understanding of anatomy and his vast expertise and experience in reconstructive surgical procedures.

These were showcased in the February 2008 issue of the very prestigious Journal of Urology of the American Urological Association.

Both are best done at a highly specialized center by a urogenital reconstructive surgeon with experience doing hundreds of cases of FtM gender reassignment surgery such as Dr Djinovic.

For patients with no previous bottom surgery, Dr Djinovic removes the female genitals, including the uterus, ovaries and vagina using a trans-vaginal approach so there are no visible scars, then immediately does metoidioplasty to create a micro penis.

The trans-vaginal hysterectomy, oophorectomy and vaginectomy take about three hours of surgery under general anesthesia combined with epidural anesthesia.

If only the vagina needs to removed the surgery takes about two hours. 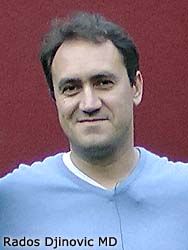 Some pre-operative preparation for SRS (sexual reassignment surgery) is the same whether followed by FtM metoidioplasty or Total Phalloplasty.

Every sex change patient needs to stop taking hormones at least two weeks before surgery to reduce risk of deep vein blood clots and should be admitted to the medical facility one day before SRS surgery for bowel cleaning — certainly not less than 18 hours before.

Only clear liquids, no solid food, can be eaten the day before transsexual surgery.

FtM metoidioplasty patients are advised to apply 2.5% dihydrotestosterone gel on their clitoris twice daily for at least one month in order to increase its size. (Use Google Translator to understand our Russian article about Dihydrotestosterone.)

If the gel available in your area contains a smaller amount of the active ingredient, increase the number of daily applications proportionately.

Small vacuum devices can be used for 2-3 months for the same purpose.

Because metoidioplasty or urethral advancement in preparation for the Total Phalloplasty are done simultaneously with the removal of the female genitals, post-operative care is the same for both procedures.

The FtM patient will have perineal drainage for 2-3 days and needs to recover in hospital 5-7 days.

Although the primary complications surgeons experience during FtM SRS surgery is injury of the rectum, posterior urethra or bladder, Dr Djinovic has experienced none of these problems using his very advanced techniques.

Approximately 6% of patients who get urethral lengthening develop fistulas.

About 80% of fistulas can be resolved without consequences — nearly 99 out of 100 patients.

Even fewer patients experience stenosis. (constriction or narrowing of the opening and passageway)

Most heal without intervention and the others require minor corrective surgery.

The Team has had two cases of testicular implant protrusion. When the person is fully healed, a new prosthesis can be inserted.

Perovic Metoidioplasty uses the clitoris to create a small micro penis that is usually 3-5 cm long when erect.

The longest recorded, 8 cm when erect, is still insufficient for sexual intercourse with vaginal penetration but can be used to urinate while standing.

The length of the penis resulting from this surgery depends primarily on the clitoral size, not the surgeon.

Scrotoplasty is done at the same time and is a standard part of Perovic Metoidioplasty.

The size of the testicular implants made by “Eurosilicone” of France ranges from 12 to 18 ml.

Like the size of the penis, the size of the testicular implants chosen depends on the amount of labia majora skin the patient has available for implantation without tension and risk of protrusion.

It depends very little on the discretion of the surgeon and the preferences of the patient.

Our Packages I, J, L & M center around the core procedure of metoidioplasty.

Recovery time in hospital ranges from 3-5 nights and about one week in Belgrade.

A patient can drive a vehicle about one week after going home, return to work in 10-14 days, play sports after two weeks and have non-penetrative sex after 30 days.

“Urethral advancement” is only a preparation for Total Phalloplasty but is an important standard component of metoidioplasty.

Some patients get metoidioplasty first and years later decide that Total Phalloplasty is more appropriate for their evolving personal life.

That is an inefficient transitional path in several ways but there are no medical obstacles.

The lower cost makes it more accessible than Total Phalloplasty and a good short-term or mid-term solution.

Some patients find it satisfies their personal goals and requirements, completing their transition.

The main differences between metoidioplasty and Total Phalloplasty are:

Both retain pre-operative ability to have orgasms. Both enable urination standing. next:  Metoidioplasty Photos